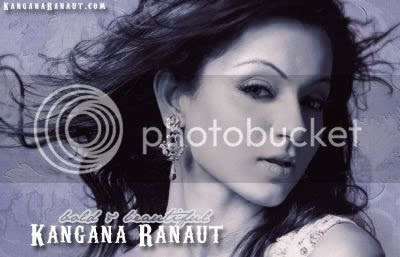 Kangna Ranaut has turned out to be the film industry’s darkness horse. Can we be so enamoured by an actress playing characters that teeter
dangerously on the edge, that it becomes unimaginable to see her play a regular woman, even though the scripts demands it? That’s what has happened with Kangana Ranaut.

In Samir Karnik’s Roshan, Kangana plays a regular girl, without any grey shades. Says Karnik, “However, the audience is so used to seeing Kangna playing dark characters that we felt compelled to throw in a shade of grey to her character. We altered the script towards the end and have now put in a grey twist in the character’s graph. In Kangna’s case, her image does precede her talent. It was like this with Vyjayanthimala earlier. Dance was somehow included in all her films — even if she played a physically challenged woman.”

“I’m proud of the characters I’ve played in my earlier films,” says Kangana. “Now if the directors can only see me play a particular kind of a character, then that’s something to hold on to, isn’t it?”
Posted by Damilola Adejonwo at 9:45 AM