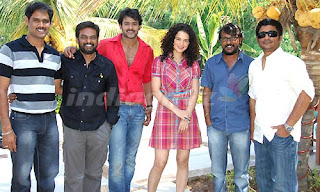 Pic: Prabhas and Kangana on the sets of "Ek Niranjan"
The picture-perfect 20-something might have made a successful career out of playing ‘dark’ roles in most of her films
(Gangster, Woh Lamhe, Fashion and even Raaz2), but those are just “reel coincidences,” she says. In real life she’s down-to-earth, level-headed and shows a maturity beyond her years. After a hectic shooting stint for a Telugu film, Kangana settles down for an exclusive interview with Hyderabad Times in her hotel room. For someone who’s being touted as the ‘highest’ paid female actor in Tollywood, Kangana would have us believe that language doesn’t “matter. Bollywood, Tollywood or Kollywood, makes no difference to me. I’m an actress who’s willing to do films in any language,” she asserts.

Of course, doing a Tamil or a Telugu film is no cakewalk for the Arian. She admits that she has to “work doubly hard. For instance, memorising up the lines and working on pronunciation involves lots of effort. However, there are some words that are common in Tamil and Telugu,” she avers.

Kangana owes her perfect 10 figure to a dedicated fitness regime that includes “yoga”, even amid her daily grind (she’s “up every morning by 4 am” and sleeps only at midnight). For someone who trusts her “instincts” while selecting films, 2009 has lots to offer — Anurag Basu’s Kites (opposite Hrithik Roshan), No Problem opposite Akshaye Khanna and Milan Luthria’s Once Upon A Time In Mumbai. Ironically, even in Kites she plays an obsessive character, something she’s done before. “Every character on screen has some resemblance to the real life characters they are inspired by. As an actor I believe in doing justice to my roles. Milan wants me to meet yesteryear actor Sona (the woman who Haji Mastan loved), on whose life Once Upon A Time In Mumbai is based. I listen to what my directors
tell me,” she says.
Considering she’s doing a lot of Tamil and Telugu films, does she have favourites? And Kangana is at her diplomatic best: “I admire Rajnikanth and Nagarjuna a lot.”
And surprise, surprise! Kangana doesn’t “want to talk” about boyfriend Adhyayan Suman even as she flashes her 1,000 megawatt smile and bids us goodbye.
Some raaz ki baat that!
Posted by Damilola Adejonwo at 4:55 PM