Kangana On Her Look For "Once Upon A Time in Mumbai" 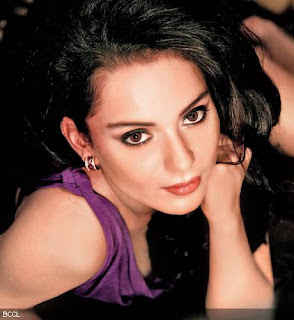 Kangana Ranaut plays a character loosely based on 1970s don Haji Mastan’s girlfriend and yesteryear actress Sona in Once Upon A Time In Mumbai. And the sexy actress is leaving no stone unturned to make sure that she’s bang on where her look is concerned.

To get into the skin of the character, Kangna has been studying yesteryear actresses in both Bollywood and Hollywood. Not only that, she is said to be working on her look that’ll be inspired by these actresses.

"From Audrey Hepburn to Asha Parekh and from Sophia Loren to Sadhana, I’m trying to get the hang of their style. The character I play is glamorous and strongly influenced by western fashion, so I want a look that’s western but which also suits someone who’s very much here,” reveals Kangna who is cast opposite Ajay Devgan in this film.

Is there one particular look she really likes? “Audrey Hepburn’s! She was a classy dresser back then. I’d love to look like her,” says Kangna. To get this look, apart from long-eyelashes and heavy eyemake-up — quite characteristic of the era — she is planning to stock up on a lot of high-waisted, narrow trousers and scarves. “Also bell-bottoms were big during the 70s, so I am studying the entire timeline of style,” Kangna says. “I want a look of that era which doesn’t look comical today!”

Impressed though she is by the styles back then, Kangna is happy being a today’s girl. “The styles are more practical and fun in our times,” she says. “High bouffants, bell bottoms are things I can’t imagine today without being laughed at.” Would she like any trend revived? “The shirts. The kinds worn back then were very feminine, practical, yet elegant. I’d love to bring them back,” she smiles.
Posted by Damilola Adejonwo at 10:59 AM