Is Kangana In "Kites" 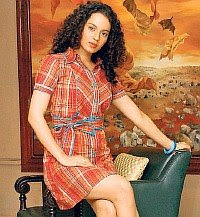 There have been rumors that Kangana Ranaut has been distanced away from "Kites" due to the fact that she is not included in the film's plot and she did not attend the Cannes, but Rakesh Roshan denies the allegations. "There is nothing like that. We have not started the publicity of the film as yet. When we do, she will get her due credit. She is very much a part of the film" he said. When the promo of Krrish was unveiled, it had only Hrithik, does that mean Priyanka was sidelined from the film? "No," he says.

Rumour mills suggest that the Roshans may have sidelined Kangana as they would rather promote the film with the hype around Hrithik and Barbara. There were reports that Kangana threw tantrums on the sets, so could this be payback? A source close to Kangana says that she has not been able to participate in the initial promotions because of professional commitments.

"Kangana is shooting for Ek Niranjan in Hyderabad and thus could not go to Cannes," adds the source. However, Rakesh Roshan has a different reasoning.