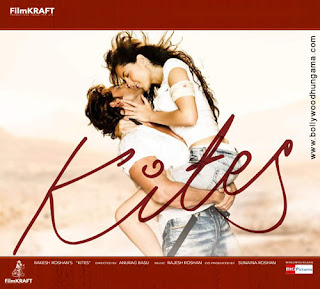 Bollywood superstar Hrithik Roshan along with his Mexican co-star Barbara Mori unveiled a teaser trailer and some key art posters of their much talked-about film Kites at the Cannes Film Festival on Friday.

"Kites is a story of love that goes beyond barriers, boundaries and cultures. With an internationally renowned crew and crisp story telling, we have attempted to create a film which we feel has a scope to reach wider world audience and set new benchmarks," said Hrithik.

Also present at the event was Hrithik's father Rakesh Roshan who has not only produced the film under his banner Filmkraft Productions but also written it.

"With each of our films we have tired to push the envelope with path breaking technique, storytelling and novel presentation. A film like Kites has never been attempted in India before. This is our attempt to tap the mainstream international audience and we are hopeful that with an able partner like BIG Pictures, we will be able to meet this objective," said Rakesh Roshan.

The film is directed by Anurag Basu who carved a niche for himself with films like Gangster - A Love Story and Life in a Metro.

"I'm glad Rakesh Roshan and Hrithik entrusted me with an opportunity to direct Kites. It has been an enriching experience to shoot the film with an international team across world cites. I'm happy that the film is getting such great exposure at Cannes Film Festival, the world's biggest film market," said Basu.

Kites, which is being marketed extensively by Reliance BIG Pictures, also has Kangana Ranaut, Nick Brown and Kabir Bedi in pivotal roles.

"We are extremely proud to be associated with Filmkraft for marketing and distributing Kites and have put together a diverse team with relevant international experience to take the film to the widest possible international audiences. Cannes 2009 is the beginning of this exciting journey," said Sunir Kheterpal, COO, BIG Pictures.

The film is scheduled for release in the last quarter of 2009.
Posted by Damilola Adejonwo at 8:30 PM