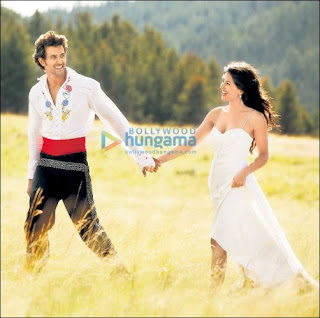 By now its common knowledge that Rakesh Roshan is taking his ambitious project Kites to the prestigious Cannes film festival this year. However, the film won't be screened for the public or the media at Cannes; instead this is just a screening for potential buyers from the West.

Kites is a story of love that goes beyond barriers, boundaries and cultures. The film stars Hrithik Roshan, Kangna Ranaut and Latino sensation Barbara Mori. The chemistry between Hrithik and Barbara is said to be among the high points of the film.

Kites is the first film by Filmkraft that has a truly international appeal. Hence, the makers are leaving no stone unturned to promote the film at various international platforms. The Kites unit comprising of Hrithik Roshan, Rakesh Roshan, Barbara Mori and director Anurag Basu will be in Cannes from May 14-17. A specially prepared trailer will also be screened to attract potential international buyers.

Indeed, the makers of Kites are going full throttle to ensure that the film gets maximum publicity across various media.
Posted by Damilola Adejonwo at 2:12 PM