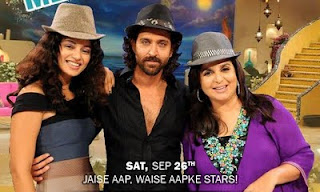 This week we had Hrithik Roshan speak about something he has never spoken publicly, his stammering problems and other hurdles he faced in life in terms of disablities. Hrithik shares openly about the pain and humiliation that he went through as a child because he had speech problems. He says his childhood was often hell. Hrithik surprises everyone including Farah by admitting on the show that he still has the problem and needs to practice everyday for an hour to get his speech okay. There are quite a lot of revelations about his childhood struggles.


The second guest was Kangana Ranaut. She shares her struggle in this industry because of her unconventional looks and the fact that she spoke in a peculiar accent. Kangana also reveals that she has no friends in this industry.


The Main Hoon Na for the episode was a true inspiaration. Pooja Kapoor is someone who has overcome her disablities and can today compose her own music. She moves Hrithik Roshan on the show with her story and never say die spirit.


Hrithik and Kangana play a game where they are given different props to use it as they want creatively in as many ways as possible.


Pooja Kapoor, the Main Hoon Na plays a piece of music on the synthesizer which she herself has composed. Hrithik , Kangana and Farah are amazed and moved.

Hrithik hugs one of the kids from the audience when he tells him about his speech problem and gives all the kids who shared their problems with him, examples from his personal life and his struggles.

Posted by Damilola Adejonwo at 6:21 PM