Kangana Is Not Upset about Barbara Stealing Limelight 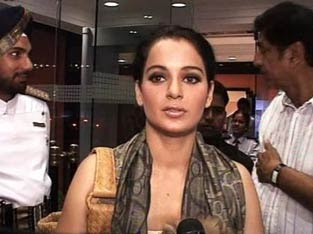 Mumbai: After playing a model in Madhur Bhandarkar's Fashion and walking the ramp a number of times on and off the screen, one would think Kanagana Ranaut has mastered the art, but sometimes even a pro can falter - like she actress did, when she tripped on her clothes while sashaying down the ramp in a Suneet Varma creation.


"The show was nice and the collection was really good. It was nice to be a part of Suneet's show. He is my favorite designer and I've done Kites with him. I was very glad to be a part of this show. It was a great show," says she.


Talking of her latest film Kites, one wonders why Kangana was not seen promoting the film at Cannes along side its lead pair Barbara Mori and Hrithik Roshan. When asked whether she felt that Barbara was stealing the limelight, Kangana says diplomatically, "Barbara will come to promote Kites because she is the main cast of the film and the film is all about lovers, so it will be good. People will really like the film."


And finally, if you thought that it was Kangana's 'good friend' Adhyayan Suman who was always by her side then you are in for a surprise. It's her pet pooch who gets all her attention, because - as she puts it - she can't leave the pooch alone.
Posted by Damilola Adejonwo at 10:17 PM