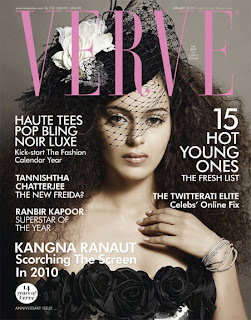 Verve starts the year with Kangna Ranaut who graces the cover for the January 2010 issue of Verve looking very beautiful. Her upcoming films are Kites, No Problem, Once Upon A Time In Mumbai and others. I wish Kangana Ranaut a new year. She had fantastic 2009 with a big hit "Raaz - The Mystery Continues" and a flop movie "Vaada Raha" and an average "Ek Niranjan". She has done lots of performances today and has grown as an actress and 2010 will be wonderful for her as she will have lots of releases. Her heart got broken this year by Adhyayan Suman, but she has regained that by winning most awards for her act in "Fashion". She gained lot of fans and I hope that in 2010, she becomes an established actress.
Posted by Damilola Adejonwo at 8:48 PM