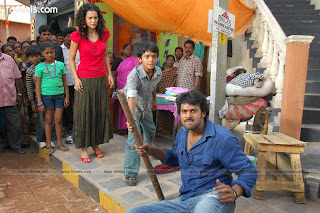 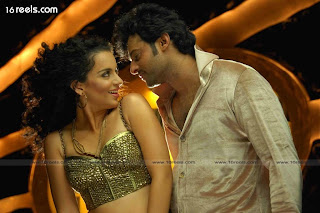 In a spacious area on Road No. 25, Jubilee Hills, a part of Hyderabad was recreated for producer Aditya Ram’s Ek Niranjan, directed by Puri Jagannath. Art director Chinna and his team brought a natural look to their creations — a clock tower, a four road junction, by lanes, a Hanuman temple, and dhobhi ghat including house sets for the lead pair Prabhas and Kangana Ranaut. The sets cost the producer Rs. 3 crore. “Watch it on the big screen, you will find it is worth its value,” says Aditya Ram as he leads us to where the action is.

It is the hero’s house set, a bachelor pad. The mud-finished walls look like a form of terracotta work. Except for a cot and an iron chair there is not much furniture. The glass panes on the main door seem to be victims of some riot. Prabhas, in a t-shirt and tracks and wearing Hawaii slippers, faces a group of irate children. Behind them stands the heroine Kangana sporting an angry look. Jagan watches their expressions as Shyam K. Naidu’s camera whizzes to record the scene. “Cut.” orders the director once he is satisfied with the children’s antics and the hero’s quizzical look.

In the next block, a small girl takes a stone and tries to throw it at Prabhas. The hero shields himself with the iron chair. To know why he has won the wrath of the children and Kangana, one has to wait and watch it on the big screen. Jagan says it is a pure commercial entertainer with high technical inputs.

Prabhas plays a dynamic, rough and tough guy and a loner. Aditya Ram says that the title song gives a glimpse into the hero’s character. His daring acts run him into trouble and in one such act he meets the heroine and she dislikes him. This is the prelude to the scene being shot. How she changes her opinion of him and how romance blossoms are part of the theme, you are told.

Aditya Ram says that they have shot two songs in Switzerland and one at Annapurna Studios, erecting four sets for the lead pair. The music is composed by Mani Sharma. Sonu Sood plays the main villain supported by Mukul Dev, Makaran Deshpande, and Brahmaji. Posani Krishna Murali plays a key role and the humour angle is taken care of by Brahmanandam, Ali, Sunil, and Venumadhav. The first half of the story takes place in Hyderabad and the second half in Bangkok. This is the first of the ten films that Aditya Ram has announced, to be produced in association with Jagan’s Vaishno Academy. “After Pokiri this will be the biggest blockbuster from Puri Jagannath and we plan to wind up the shoot by September,” signs off Aditya Ram.
Posted by Damilola Adejonwo at 9:09 PM