Kangna Ranaut’s movie journey is only three years old. But with a National Award already in her kitty, it looks like a promising ride ahead

Did you ever expect to get a National Award so early in your career?
I have got an award every year ever since I made my debut. But, yes the National Award was a surprise and an honour. I will always cherish it.

Is there any person to whom you would like to dedicate your award?
It would definitely be the makers of my first film, Gangster, because were it not for that film I would not have been here. Giving a break to a small-town girl with no background of films or experience was a big risk, and I am grateful to them for that.

For the first time you will be seen shaking a leg in two films, No Problem and Tanu Weds Manu. Did you enjoy matching steps with your choreographers?
In No Problem I actually danced in a saree to this very peppy Punjabi number composed by Pritam. It was more of wriggling hips like Shakira than matching steps, but thanks to choreographer Chinni Prakash I managed quite well. In Tanu Weds Manu Saroj Khan made me do the typical Bollywood jhatkas and matkas. It was fun. It will also be the first time that I will be seen in an all-Indian look in a film wherein I wear mostly kurtis and mojris.

Both No Problem and Tanu are comedies. What do you have to say to your new avatar, that of a romantic comedienne?
I know I started off with doing dark, intense roles that received critical acclaim. But an actor has to move on. I had a great time doing the light-hearted films. It brought out a side that even I did not know I had! Thanks to director Anees Bazmee and Aanand Rai.

Are you enjoying playing a cop in Crooked?
It was destined that I do the film. I had declined the film earlier because of date problems but because of a change in schedule in the shoot it came back to me. I have just started shooting for it…. Yes, it looks as if I am going to enjoy being on the other side of the law.

At what stage of production is your film Actor with Amitabh Bachchan?
I believe that the makers are trying to sort out Amitabh Bachchan’s dates. Once that is done, we start shooting.

Is it true that you have no scenes with Sanjay Dutt in Sohail Maklai’s Knockout?
Yes that’s true. Knockout is a political drama and Sanjay plays a man who takes on the political system from within. I may not have any scenes with him but at I am happy being part of a very intense film.

Your character in Milan Luthria’s Once Upon A Time In Mumbai also sounds interesting.
A lot of thinking went into creating this character of an actress, who is a don’s girlfriend. She is very glamorous and influenced by Western fashion. So I wanted to create a look which is western, but suits someone Indian. It is an intriguing mix of Audrey Hepburn’s, Sophia Loren’s, Asha Parekh’s and Sadhana’s styles. There are a lot of high-waist narrow trousers and scarves. It’s a ‘70s look without being comical.

Is there any style you would like to bring back from the 70s?
Skirts! The kinds worn then were very feminine, practical and elegant. I would like to see more girls wearing them.

Are you anxious that you are not seen in the publicity of Kites?
I have a guest appearance in the film, and it is up to the producers how they want to project me. There is nothing to be anxious about.
Posted by Damilola Adejonwo at 2:26 PM No comments: 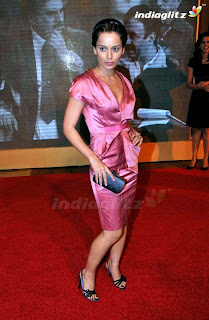 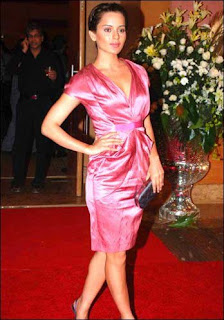 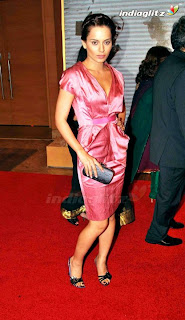 Posted by Damilola Adejonwo at 2:20 PM No comments: 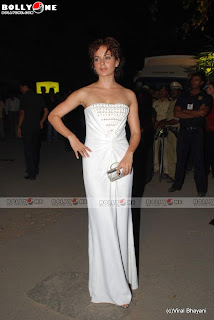 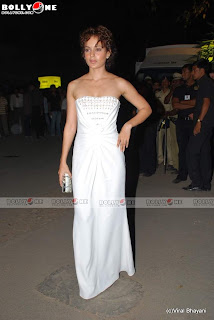 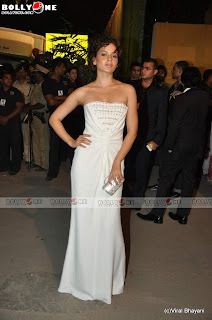 Posted by Damilola Adejonwo at 3:17 PM No comments:

Kangana: I am done with dating

There was buzz that director Kunal Deshmukh and Kangna Ranaut are an item. If that’s true, then Dino Morea must have rocked their love boat! The pictures of her and Dino, in what looked like a passionate kiss was harmless according to the actress. “I know Dino for a while now. We’ve met socially and even had a few laughs but to make it seem like there is something more is terrible,” says the curly-haired temptress. Ranaut also adds, “I’m done with relationships.

I have 10 movies to complete this year, and will perhaps take on another dozen next year. What I’m trying to say is that I’m completely swamped by work. I have no desire to get into another relationship. I’m done with those.”

The actress says the next time she dates a man, it will have to lead to a walk up the altar. “Marriage is what it will be,” says Ranaut, adding, “I may marry three years

down the line or perhaps even five years down the line. But I’m certainly not interested in the dating scene.”
Posted by Damilola Adejonwo at 7:16 PM No comments:

Kangana Ranaut gets 5 crore for a film

Actress Kangana Ranaut has apparently understood her true worth and with her current fee demand for signing a film she has put herself among the top actresses of the industry, who get what they want.

‘Ask and ye shall receive’ - Kangana asked for whooping Rs 5 crore for signing a film and the producers weren’t hesitant to fulfill her demand at all. The film is a love story and stars former Union Minister Ram Vilas Paswan’s son Chirag Paswan. There are talks that the movie has scope for three actresses. Hunt is on for the other two.

As a source tells a daily, “Kangna has come a long way from the days of her debut film Gangster. Directors realize her potential and have no qualms in giving her the fee she deserves.”

The movie is produced by TV actor-turned-producer Anuj Saxena. Confirming this news, COO of his company Pooja Kashyap is quoted as saying, “Kangna is a great actress. She adds a lot of value to a film. What we have paid her is fully justified.”

The demanding Kangs!
Posted by Damilola Adejonwo at 7:15 PM No comments:

Dino Morea is certainly living up to his Casanova image. At the second wedding anniversary party of Sanjay Dutt and Manyata on Friday night, Dino had eyes only for Kangna Ranaut.

And watching the PDA in action, it didn’t seem like the single again Kangna was minding the attention one bit.

While the party, held at Sanjay’s and Manyata’s residence, was off limits to the press, a source at the party reveals, “It was a well attended affair and several couples like Shilpa and Raj Kundra, Sunil and Mana Shetty, Fardeen and Natasha Khan, David Dhawan and wife Lalli, besides some others like Kirron Kher and Amar Singh were present. Dino, who made an appearance sans his steadiest girlfriend Nandita Mahatani, had lots to talk about with Kangna Ranaut. Before long, they were chatting away so intimately that it was difficult to believe that this was their first proper meeting at a private party.”

The source continues, “During the course of the evening, Kangna was seen mostly around Dino and they were overheard discussing movies, especially their common interest in Hollywood films. Dino flattered her with many compliments about her best roles. Interestingly, when they both decided to leave at the same time, they hugged each other rather warmly and the peck on the cheek was as hot as it gets. In the lobby, as they waited for their cars, a happy Dino couldn’t resist hopping on a kiddie car lying there, which made Kangna burst into delighted laughter.”

But though Dino succeeded in tickling Kangna’s funny bone, they left soon after in their respective cars. If the sparks between them on Friday night are any indication, there might be more to come.

• During the course of the evening, Kangna was seen mostly around Dino...
Posted by Damilola Adejonwo at 2:07 PM 1 comment:

Looks like it's the season to either book, buy or move into new residences. Evidently something is right somewhere with the finances in the film industry.

We have a story about Vidya Balan buying a four-bedroom apartment at Khar (see below) and now comes the news that Kangna Ranaut has just purchased her dream home in an under-construction building at Bandra.

The house has everything that Kangna needs. It is a triplex penthouse with a living room, guest bedroom, kitchen and terrace on the first level, three bedrooms on the second and the master bedroom, a swimming pool and gym on the third. Additionally her home will have a private lift so that her friends can party or visit without disturbing the rest of the household.

Kangna has been looking for a bigger house so that she could have her parents stay with her. They have a huge house in Manali and Kangna was keen to be able to house them in a spacious apartment in Mumbai.

She has also purchased three parking spaces to go with the apartment, and though she declines to go into details of her new home which is still in the nascent stage, she is obviously thrilled to be able to provide the best for her parents.
Posted by Damilola Adejonwo at 2:06 PM No comments: